How We Do Wages

One of the unjust things I encountered first hand in the corporate world I used to be in (as told in the “Family Mission Statement” post) is the way that wages wildly fluctuated among employees of the companies I consulted at. The consulting jobs that I worked on often gave me access to internal company wage data, and I often became acquainted with many of the employees whose data I had seen. Of course I cannot discuss what I saw directly, but I can summarize.

I saw employees that were doing roughly the same job yet were paid wildly different amounts. It seemed that the “modus operandi” of each company was to try to acquire each employee at the lowest possible cost. This left each employee pretty much on their own to negotiate their own individual “best deal” with the company. This exposure and experience left me initially leaning in favor of Labor Unions, where the employees would be in a collective bargaining unit that would theoretically be free of that kind of bias and discrimination. And indeed at one point I became an officer of a labor union, in an attempt to try to help the employees. But I discovered that even labor unions have their own set of problems and politics, and things are not always as they appear, or as they should be. So I resigned, and I have no intention of ever becoming involved in a labor union again, and will discourage my family from doing so as well. This might not set well with those who favor labor unions, and to them I apologize. I will also refer back to our Family Mission Statement (in my “Foundational Family Values” post), and if your labor union brings you value in a way that is in harmony with that Mission Statement, I support you and am happy for you. But I don’t think it is for me, or for my family.

I knew I had to create a different foundation for our company, Bountiful Baby. And what I came up with is a “Employee Merit Voting” system, where the employees themselves vote on each other, and the computer tabulates the results and assigns the wage. This is intended to keep things fair and uniform. And it has worked out fairly well so far.

I also wanted the employees to have a livable wage, to the best of my ability to provide it. For any given job description within an industry, you will find a bell distribution curve for the pay. If you plot the number of companies on the Y-axis, and the wage on the X-axis, you will get a pay curve something like shown below. I wanted my company to pay slightly above the median wage for that job, and that is represented in the “Target” line that is to the right of the center of the curve. I felt that would be a good sustainable target, and allow me to give as much as I sustainably can to the employees. That is what we have tried to do, and if we ever become a publicly traded company, it is what I will push for. 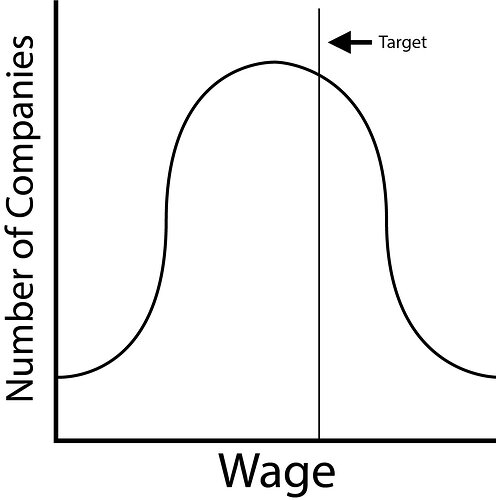